. . . a huge sign, representing on the one side St. Ronan catching hold of the devil’s game-leg with his Episcopal crook, as the story may be read in his veracious legend . . . 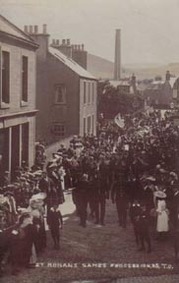 Thus Sir Walter Scott described one side of the sign at The Cleikum Inn in his novel St. Ronan’s Well, first published in December 1823. Later in the story we learn that the word “cleikum” was derived from the action of our saint’s crook when apprehending the Deil; that is, “cleikin’ ’im” by the hind leg in the manner of a shepherd capturing an errant lamb. Owing to the immense worldwide popularity of the author it was expedient to associate the setting of the novel – a Borders spa village - with Innerleithen. Local tourism benefited greatly and the annual meeting St. Ronan’s Border Games (founded by James Hogg the Ettrick Shepherd in 1827) was held initially to give the locals an enjoyable pursuit and to entertain the many visitors thronging the village during the “season”.

The Diamond Jubilee of Queen Victoria in 1897 prompted much celebration and pageantry in communities throughout Britain. St. Ronan’s Border Games committee responded by commissioning a new banner from Innerleithen-born George Hope Tait, the designer of the Burgh Arms. Initially this banner was unfurled in “Mr Euman’s shop by a few enthusiasts” but in 1900 it was decided to put the ceremony on a more formal and public footing. On the Friday evening of August 17 the townspeople of Innerleithen “crowded to excess” the Chapel Street Hall to celebrate “The Nicht Afore The Morn” under the chairmanship of Provost William Stewart. Mr R. Nicol, “one of the oldest and most respected residenters in the town” and who had been present at every St. Ronan’s Border Games since its inception in 1827, presented the “highly decorative” banner to Standard Bearers James Hope and Robert Euman. According to the report in The St. Ronan’s Standard Miss Annie Stevenson, a local “poetess”, then pinned “colours” to the breasts of the Standard Bearers. William Sanderson (Tweedside Laddie) and Thomas Aitken (Games Secretary) gave speeches and the ceremony concluded with several votes of thanks. In view of what was to follow later it is interesting to note the songs sung on this occasion included “Flo’ers o’ the Forest”, “Blue Bonnets Over the Border” and “The Soft Lowland Tongue of the Border”.

The inaugural Cleikum Ceremonies took place on Friday 16 August 1901. The doors to the Volunteer Hall (now the Cleikum Mill flats at the west end High Street) were opened at 8pm and the interior was quickly filled with a crowd of an estimated one thousand people. This year Provost Robert Mathieson was in the chair. Present were the Games and ceremonial committees as well as Innerleithen bailies and councillors. Following two verses of the 100th psalm and a prayer from the Reverend Pate the chairman of St. Ronan’s Border Games committee, Councillor Purves, launched into a long and, for modern tastes, flowery speech. References to Sir Walter Scott and James Hogg and the town’s newly created “device of arms” preceded the assertion that the Games had recently become more popular. Games Day was a day of reunion. The chairman stressed the importance of “the purpose and part a community has in the encouragement of education among her children”. This was to be demonstrated by the installation of the dux boy of the year as titular St. Ronan, “a mark of appreciation by the whole community”. Prophetically, he continued, “The occasion will ultimately become a local fete and a red-letter day in the future of Innerleithen.”

Clad in white surplices with red hoods and girdles the schoolboys “who were dux in their respective standards” ascended the platform. The Dux Boy also wore a breastplate showing the burgh arms. The “Junior Boy” (Lantern Bearer) was dressed in a blue (according to the Standard report – it was more likely to have been green) robe with a white hood and cuffs. His breastplate was adorned with the now familiar figure of St. Ronan standing in a boat.

Another speech followed, this time from Provost Mathieson who explained that the unique ceremonial taking place that evening was brand new and had emerged from “pure originality”. If it became necessary it would be up to their successors to improve and put right. The Provost said that St. Ronan had been a teacher trained in the school of St. Columba in Iona. The patron saint they had adopted had emanated from a school that was most illustrious and intellectual. Thus “we have received and adopted a very high standard by which we can measure our character as citizens of the town bearing the name of our patron saint”. It had been decided, therefore, in connection with the ceremony of that evening to recognise educational merit. Provost Mathieson then installed William Williamson, the dux of Innerleithen Public School, as St. Ronan by handing him the lamp and staff symbolic of the Patron Saint.

Over one hundred and ten years later the Dux Boy is still addressed at his installation as he was then:

In the name and by the sanction of the loyal sons and daughters who treasure the old associations of this ancient town, we proclaim you our chosen titular head; the representative, true and undisputed, according to our judgement, and in virtue of your own individual merits, as most worthy to sustain and uphold the honour that time and tradition attributed to our Patron, St. Ronan, as shown forth in the history, the heraldry, and the legendary of our Arms. By the deeds of our ancestors we are enabled to walk into a higher light, a wider freedom, and a broader truth. As a memorial of this proud retrospect we bequeath to you the symbols of a noble and triumphant past – a heritage which is yours and ours – Watch and Præy, and with the might of your understanding and your knowledge battle for the right and despise evil. Seek the good of your native town, cherish its old associations, and perpetuate its high name. So shall you honour your office and hand down the banner of St. Ronan undimmed and untarnished to be the glory and boast of future generations.On St. Ronan’s then received its premier public airing from a male quartet. The new St.Ronan performed his first official function by handing out the staves to his followers – they were not referred to as “monks” then – and the lamp to the “lay brother”. After Miss Jessie Purves had bussed the staves, Mr Alexander Eckford presented the banner to Standard Bearers Robert Euman and James Hope. The quartet was in action again with another first public rendition, this time Raise High the Banner. Looking on at this first Cleikum Ceremony were John A. Anderson who wrote the words to the latter song, and George Hope Tait, who devised the Burgh Arms, the Games Banner and the Cleikum Ceremonies. The occasion concluded with various votes of thanks and a statement from Games secretary Thomas Aitken that the balance of accounts had risen from a few shillings when he had taken over as secretary 21 years previously to a then current £94 3s 4d.